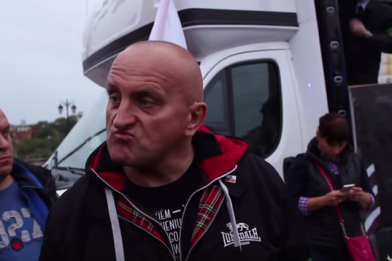 Marian Kowalski is one of the founders of the far right organisation Ruch Narodowy (National Movement) in Poland. He is also a long time nationalist activist, involved in organization of neo-nazi gatherings in the city of Lublin where he lives. He had been a presidential candidate for several far-right parties and is well known for his extreme, racist beliefs.

He is supposed to be having an open meeting on 21st October
https://www.facebook.com/events/226010344596589
We cannot allow him to come here and spread his poisonous, divisive
message. Dywizjon 161 is appealing to everyone concerned to contact the
venue, which is a Polish restaurant in Ealing and politely ask them if
they are happy to host such a person.

This entry was posted in ANTYFASZYZM and tagged Antyfaszyzm, Londyn. Bookmark the permalink.